So’s you know, (and frankly, if you’re reading this blog, I have a feeling you do), David Tennant is no longer the star of Doctor Who. As a fan, this is really depressing for me. As someone who has had a crush that verges on obsession on David Tennant ever since I recognized the new face of Christopher Eccleston’s Ninth Doctor as the simultaneously magnetic and repulsive Barty Crouch, Jr. in Harry Potter and the Goblet of Fire, it is devastating. I had also seen a random episode of Taking Over the Asylum at that point, but couldn’t reconcile the wild-eyed cockatoo that was the Tenth Doctor and Barty Crouch

See what I mean. Wild eyes.

with the sleek haired manic-depressive kid from the obscure British TV show. 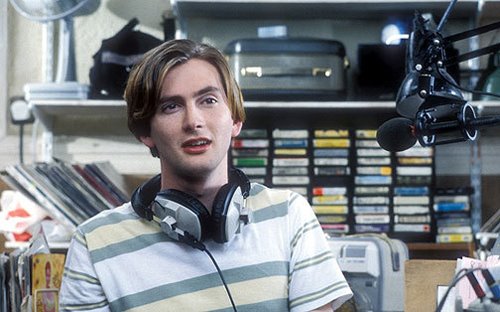 The point is, David Tennant’s Tenth Doctor was one of the most powerful characters on television, mostly thanks to the combination of Tennant’s comprehensive RSC training and his good-natured love of all things geek. D10 is tragic, witty, charismatic, and terrifying. Mercurial in the truest sense.

I’ll admit my crush is stupid, a combination of my love for anyone who can handle Shakespeare well and my love for sci-fi, but there’s a real sense of loss here, and I’m not the only one feeling it.

As evidenced by the current trends in this poll in The Guardian, as much as io9 wants to say that we’ve forgotten D10, a lot of us are still recovering. So, without further ado, here are the Five Stages of Grief for Doctor Who.

This is the most vivid of the stages for me. During the first episode of Series Five, I found myself squirming in my seat like a four-year-old, screaming “YOU’RE NOT MY REAL DOCTOR!” in my head like a child of a really messy divorce with a new stepdad. I nitpicked every bit of Smith’s performance, noticed every time he made a choice even slightly similar to Tennant, hated on his bow-tie.

Your bow-tie is stupid and your assistant is a red-head who isn’t Catherine Tate. I HATE YOU.

This is the time when you will appear the most crazy to people who are normal. You might want to keep your mania to yourself.

This is when you get to the point of accepting the fact that Tennant is moving on, but you’d prefer someone you knew and trusted came in. Catherine Tate already showed us her weebly-wobbly timey-wimey side. Why can’t she do it?

You sink into a deep depression, so deep even this video can’t cheer you up:

You re-watch old episodes. Even the Series 3 episodes have an unexpected nostalgia for you. You click you sonic screwdriver pen on and off, sighing sadly in the dark.

I meant to have something snappy to stay. What was it…?

Okay, fine, Matt Smith is competent. In fact, in the clip below, deleted from the brilliant In Bruges [warning: graphic violence], he’s wonderful. I’m not sure I buy his Eleventh Doctor, but it’s one episode. We’ve got time.

David Tennant gave him his blessing and went off to film Hamlet. If he can move on, so can I. I hope. Even though thinking about it still makes me feel like this:

It’s just a TV show. All this rage and pain, this engagement is over a TV show, even for an eggshell.

Lord, what fools we mortals be.

This is my jester stick. It goes “ding!” when there’s stuff.

8 thoughts on “The Five Stages of Mourning the Tenth Doctor”